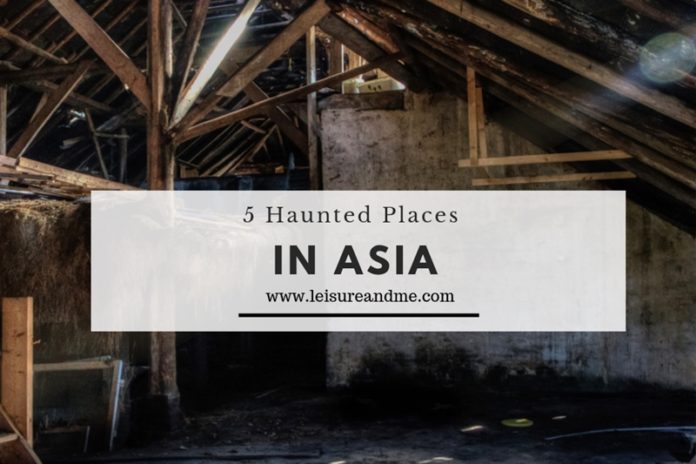 You don’t need to believe in ghosts or any form of the afterlife to understand that some places are intrinsically creepy. If the atmosphere is right anywhere can feel creepy, even the well-known, such as your own home. Switches the lights off and lie in bed and you’ll suddenly hear strange noises.

But, most of these can be reconciled to the rational mind and leave you feeling disconcerted but happy. The same is true for some of the best ghost tours in the world.

However, there are some places that will leave you feeling more than a little disconcerted and the feeling isn’t simply going to disappear. Here are the 5 creepiest places in Asia:

This small town is near the hill station of Darjeeling, famous for its tea. It’s a well-known tourist destination and also a creepy, almost deserted town.

The hill station is virtually deserted and surrounding by surprisingly sinister forests, as the sun starts to drop you’ll hear the wind whispering and you may even see a headless corpse or two. People have even reported the ghost of a woman running after them.

The phenomena are actually connected to a haunted Victorian school where a multitude of murders and suicides have happened over the years.

The buildings here are approximately 2,000 years old and are steeped in religion. For many years it was a popular and fairly important town. However, in the 18th century, the focus turned to the afterlife and man buildings were created as shrines to the afterlife.

Gradually the town turned into a ghost town, fulfilling its own prophecy and leaving behind an eerie place halfway between two worlds.

3. The Forbidden City in China

It’s said that in excess of 600 people have been murdered in the compounds of this city, most of them concubines, guards, and members of the Imperial family.

This city actually sits in the heart of Beijing and consists of more than 100 buildings. There are many stories of soldiers chasing people only to find they have no faces, the souls of those that died are trapped here, it’s not advisable to stay after the tour has finished!

Singapore may be an important financial center today, but it has a violent past. This particular hospital was built by the British but used by the Japanese to torture prisoners of war during the Second World War.

While some survived, many others didn’t and continue to haunt the hallways and rooms of this grand building. It’s best not to stay after dark.

The literal translation of this is ‘prostitute gorge’, that gives you an idea of who is still here, haunting the area. The story goes that the Takeda family who provided the miners with a brothel fell onto hard times.

To help deal with the issue they created a deck over the gorge ad invited all 55 prostitutes for drinks. Once they had consumed enough drink the family left and cut the ropes, sending them all to their deaths.  You’ll find them scattered around the area.

How to Fly Free with Credit Card Sign-up Bonuses

Best Secrets on How to Get the Best Hotel Rates

Travel to PhuketFit for Your Detox Holiday