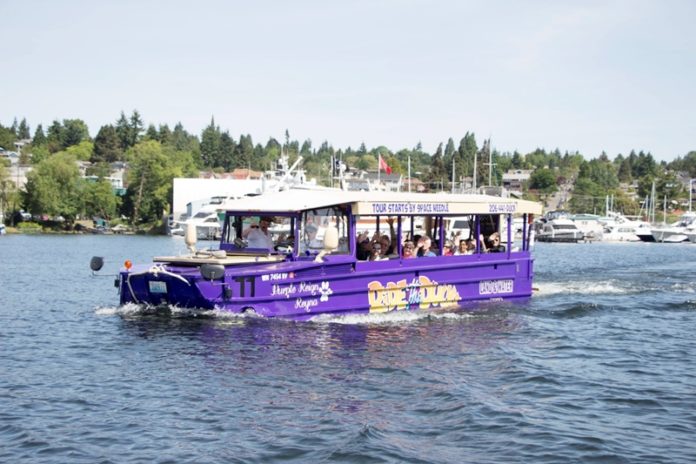 Seattle, once a typical working-class and industrial city, is now one of the most popular locations for both life and tourism. The streets of this city carry an atmosphere so atypical for the United States. Although it is located in the Pacific Northwest, you will be amazed by its European charm and the number of young and fashionable people on the streets.

The city itself has a fantastic geographical location. It locates in spectacular Puget Sound, surrounded by numerous lakes and narrow sea bays. Opposite the sea, there are the vast coniferous forests and snowy peaks of the Rainier volcano. All this gives Seattle a breathtaking outburst and makes this city shine.

Therefore, if you have the opportunity to visit this former West Coast industrial metropolis, you should go touring both from the ground and water. If you decided on the transition from the streets to water sightseeing, Ride the Duck street and boat tours are a must. Judging by tourists’ experiences, this is something you should never miss if you’re coming to Seattle.

What Sets Ride the Duck apart from Other City Tours

Tourists go on tours of the cities they are in to find out something new and learn. However, these fact-finding tours can sometimes be tedious and monotonous. Sure, you will enjoy the sights you visit, but your brain will be overwhelmed with dull facts.

A tourist guide is the one that should inform the tourists, providing adequate knowledge about the locations they visit. Their approach should be friendly, not just ‘bombing’ people with figures and historical facts.

That is what tourists most praise about Ride the Duck tours – guides that are both knowledge-based but also ready to joke and sing around. They’ll animate the tourists for 90 minutes, telling fun facts, cheesy jokes, and anecdotes related to Seattle tourist sites. In some moments, you’ll be confused, whether you’re in a stand-up show or tour vehicle.

Another one difference is a pretty obvious thing – this is a ‘two in one’ tour from the land and the water. For this purpose, tourist agencies use the unusual amphibious vehicle that the civilians call Duck. Its primary usage was for military purposes, and its real name is DUKW. For more on the historical significance of this transport machine, read this link.

From the Needle to the Market

The wordplay in the title can be interpreted as a wide selection of what you can see on the Duck Tour in Seattle. It may also refer to the Space Needle tower, a city trademark and the biggest attraction for most Seattle first-comers.

The second part relates to the Pike Market, the primary location for those who want to enjoy ordinary daily activities and socializing with others. In Seattle, everyone loves to go to the market and get healthy food, fresh fruits, and vegetables, and fish just caught in the Bay; especially cod, which has become a trademark of this city.

The tour continues to the coast, where you will enjoy the beautiful view of beautiful Elliot Bay. You’ll see the busiest Ferry Terminal in the United States, but also the amusement park where Great Wheel, the highest Ferris wheel on the west coast, dominates.

The next part of the tour is dedicated to history fans – a visit to Pioneer Square. You’ll hear many exciting and imposing facts about Seattle throughout history, from the inception of this city in the 19th century to the present day.

On the Duck Tour, you have a look at the Seattle monorail. You will admit, it is not something that’s on the ‘must visit’ list of tourists in Seattle, but it is essential to feel the heartbeats of this town. Like in any metropolis, people are hectic and deeply in their thoughts. But this rush is not like any other – it has a hipster note.

Head to North, check breathtaking Mountain Rainier and Lake Union, where you’ll soon dive into. Near Gas Works Park, where you can see the closed gasification plant, the Duck amphibian goes into water mode.

As you slowly dive into Lake Union, you will notice a large number of houseboats. So, if you are planning to stay in Seattle for a more extended period, renting this type of accommodation is possible, and quite affordable.

More about this exciting concept of living check out the following source: https://www.marineinsight.com/types-of-ships/what-are-houseboats/.

Seaplanes are also an unavoidable attraction of Seattle. Some of them can quickly fly over your head while your Duck cruises the lake. In this case, the guides invite you to wave the pilots and applaud their loops. Flying above the beautiful Puget Sound is an extraordinary experience, so consider this way of touring Seattle and this part of Pacific coastline of the States.

After touring Seattle throughout the day, use spare time in the evenings and nights to visit restaurants and clubs. You can try many world gastronomical masterpieces here. The food is prepared and served in a way that more reminds of Europe than the States. Of course, for fast-food lovers, you can find everything, from pizza to tacos.

The clubs find their places along Bell Street in the Belltown neighborhood. It was the center of Seattle’s nightlife in the 1980s and 1990s. Grunge originated in this city, in the abandoned and neglected garages in this area. Fans of popular rock band Nirvana are visiting Seattle to check out the museum dedicated to this band, and to see where their idols started.

Since the Duck Tour lasts about an hour and a half, this is not enough time to visit every attraction you see. But you can get an idea of what to do the day after touring Seattle this way. Wherever you go, don’t forget the large cup of coffee you will drink from your hand, by the way, to your final destination. This ‘trend’ originated in this city and became one of the trademarks of the States.

4 Tips to Make Traveling With Your Kids Easier

14 Best Things to do in Little India Singapore

A Travel Guide for Nakano Tokyo